Louise Morris reveals why political dissent in the Honduran capital Tegucigalpa, isn’t music to the ears of the right wing government

The city’s sprawl is vast, 77.6 square miles of grinding poverty and violent desperation, a transit point for cocaine smuggling into the US, and the centre of a new cultural boom. This is Tegucigalpa, Honduras. With the highest murder rate in the world it is unsurprising that art is not a national priority. But if you peer through the layer of synthetic Mexican ballads and scrape past the abrasive throb of reggaeton that make up Honduras’ mainstream musical output, a powerfully creative DIY music scene smacks you in the face with its urgent criticisms and vibrant fusions.

As we sit in a cafe perched high above the bleak crumbling concrete landscape of the smog enshrouded city, Carlos Padilla of Latin-rock band Siddhartha explains:

‘For us music should express not an escape but an encounter with the reality around us. There is a need for us to create a new cultural awareness of the social and political relationships: to tell the truth, to be irreverent, to unmask the injustices.’ 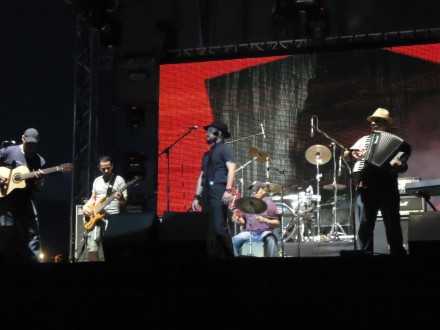 Of all countries this is especially pertinent in Honduras. In 2009 a coup d’état ousted Liberal President Zelaya causing international uproar. Locally bands and citizens alike took to the streets in protest with a Café Guancasco concert being violently dispersed by the military. A bystander was killed and the band have since received death threats. Not all musicians have taken sides, with the general consensus agreeing with  Alfredo Kaegi, singer of alt-rock band Sueño Digviana, “that most political figures in Honduras are shameless assholes”.

However, the coup seems to have galvanised the latent creativity in Tegucigalpa’s music scene with many new bands forming and an increased urgency to define a Honduran cultural identity. With Honduras being the heart of Central America it seems natural for the country’s underground music to subsume influences from a wide range of sources while retaining a distinctly national flavour. This frequently blends the driven West-African drumming styles from the Garifuna people of Honduras’ coastline with folkloric accordion segments, lilting Spanish guitars and a passion for classic rock. As Alfredo concludes ‘How can it not be a fusion? We are the centre of the new silk road.’

Fraught with restrictions and obstacles the Tegucigalpan music scene is constantly tested. When speaking of some bands’ desires to move North into the established industries of Mexico and the US, the vocabulary of the musicians becomes combative, with folkloric-jazz band Pez Luna reminding potential defectors that ‘the first fight is here’. Tegucigalpa’s music scene may be conflicted but it is resilient and is slowly carving a new national, albeit heterogeneous, identity.